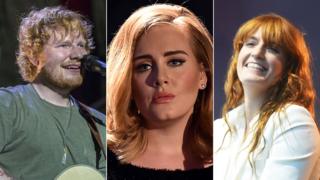 Adele, Ed Sheeran and Florence + The Machine lead the nominations at the BBC Music Awards in Birmingham later.

All three are up for best British artist, with further nominations in the song of the year and best live performance categories.

Newcomer Jack Garratt has already been announced as the winner of the BBC Introducing Award.

Hosted by Chris Evans and Fearne Cotton, the ceremony will be broadcast on BBC One at 20:00 BST.

One Direction will also give one of their final live performances before going on hiatus in 2016.

Many of the acts will be backed by the BBC Concert Orchestra.