British singer Sting and Oscar-winning US actor Tom Hanks have been feted in Washington as recipients of this year’s Kennedy Center honours.

Soul singer Al Green, 9 to 5 star Lily Tomlin and ballet dancer Patricia McBride were also saluted at the White House ahead of a gala concert.

Sting, 63, said it was “rare” for an Englishman to receive the honour.

“I’m not sure when I’ll wear it again, but I think I look rather fetching in it,” he said of his rainbow ribbon.

The former Police frontman is set to join the cast of his Broadway musical The Last Ship, about shipbuilding in the north east of England.

Hanks, who won Oscars for his roles in Philadelphia and Forrest Gump, said he “couldn’t believe it” when he was told he was among the honourees.

Tomlin, 75, also admitted she had been surprised by her selection, saying she had “never been privy to the insider’s circle”. 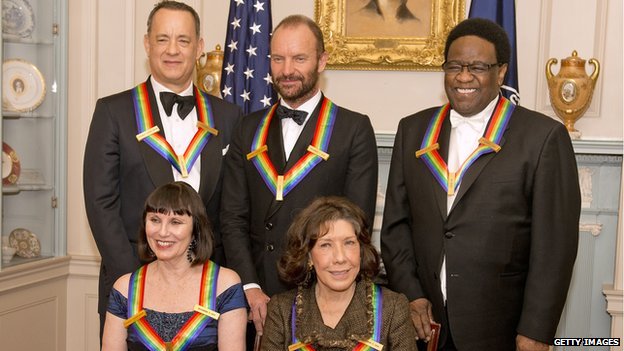 The event preceded a concert at the Kennedy Center for the Performing Arts which saw Lady Gaga, Bruce Springsteen and Bruno Mars sing Sting’s hits.

The musician told reporters it was “quite something [to] have other people sing my songs and have to do virtually nothing but smile”.

6 Superfoods Your Body Will Love!