The Last Ship, Sting’s musical about shipbuilding in north-east England, has opened on Broadway to respectable, if qualified reviews.

The New York Times described it as “ambitious, earnest… and seductive” while identifying some “nagging flaws”.

Time Out New York, meanwhile, said it was “rollicking and often glorious” but lacked “sympathy-generating detail”.

“You relinquish a lot of control,” the 63-year-old told the Playbill website. “But all of these people bring something to the process I can’t.”

Written by John Logan and Brian Yorkey, The Last Ship features songs from Sting’s 2013 album of the same name.

Newcastle-born actor Jimmy Nail and Rachel Tucker, a finalist on BBC One talent show I’d Do Anything, are among the cast of Joe Mantello’s production. 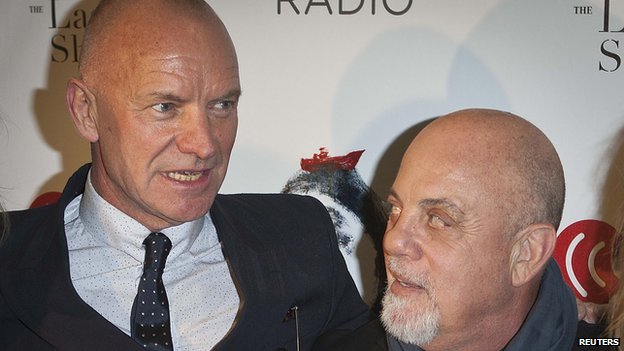 Set in Sting’s home town of Wallsend, the musical tells of a group of unemployed shipbuilders who take over a closed factory to build one final vessel.

Its main character is Gordon, a prodigal son who returns after 14 years to find the town and its community close to economic collapse.

Entertainment Weekly‘s Kyle Anderson, however, said the show “trots out a series of dirges that lack the dynamism necessary to keep audiences fully engaged”.

“This melancholy musical is without doubt a heartfelt, intensely personal project,” wrote David Rooney in The Hollywood Reporter.

How to Cast Your Vote for the YTMAs: Reggie Watts Explains

Jim Davidson to star in 'honest' show about...