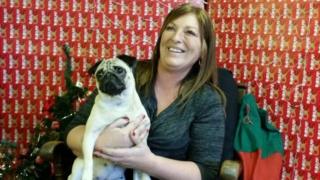 A stolen dog found wandering the streets of a Lancashire town has been reunited with its owner – more than 200 miles away and a year after the theft.

But their inquiries drew a blank, until Nellie was found in Burnley and passed to a vet’s practice.

The vets were able to trace Nellie’s owner through her microchip.

'No progress' during talks, Adams says

Houses of Parliament should be sold off, Labour...