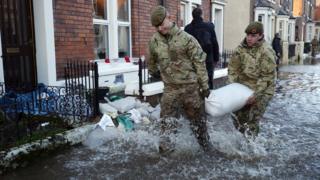 The Army was called in to help with efforts to protect homes against floods in some parts of the UK, including here in Carlisle

About 16,000 houses in England were flooded during the wettest December in a century, Environment Secretary Elizabeth Truss has told MPs.

Defending the government’s response to the crisis, she said flood defences had protected more than 20,000 homes.

Financial aid was provided in “record time”, and there are plans to further improve flood defences, Ms Truss added.

Alleged hacker Lauri Love to be extradited to...