Stormy December 'was wettest on record' 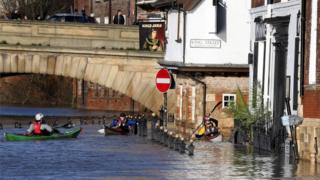 December was wettest on record for UK – Met Office says

December was the wettest month in the UK in more than a century, provisional Met Office figures show.

It was also the wettest calendar month overall since records began in 1910 – and 2015 was the sixth wettest year, data showed.

Scotland and Wales both had record-breaking rainfall in December.

The UK mean temperature for the year of 9.2C was warm but not exceptional, said the Met Office, and not quite hot enough to beat the 2014 record of 9.9C.

Warm, wet, but not the norm yet

Mean December temperatures, which reached a record 7.9C, felt more like April or May days.

England saw virtually no frost and, in the UK overall, there were fewer than three days of frost – normally, December would see about 11 frosty days.

Dad's search for a little blue cup for...