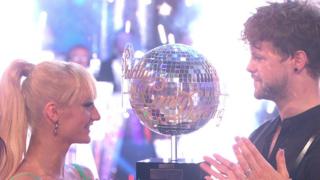 The former member of The Wanted, who danced with Aliona Vilani, was the hottest favourite in the show’s history, according to bookmakers.

The other finalists were broadcaster Katie Derham and Anton du Beke and soap star Kellie Bright and Kevin Clifton.

Strictly Come Dancing: As it happened

Speaking after he and his partner were announced as winners of Strictly Come Dancing, McGuinness said: “I just think it has been one of the most special things I’ve ever done and with the most special person.

“If anyone watched who helped us to get here and then enjoyed what we were doing I’m really happy that you liked it because it’s the best thing I’ve ever done.”

The results show opened with Derham and Du Beke in fourth place.

All the couples performed three dances in this year’s final – one routine from a previous show that the dancers had chosen to perform again, one judges’ choice and a showdance.