The winner of this year’s Strictly Come Dancing is set to be decided later, with four couples competing for the glitterball trophy.

Pop stars Frankie Bridge and Simon Webbe, TV host Caroline Flack and former The Only Way is Essex star Mark Wright will dance for the honour.

All four competitors will have the chance to perform their freestyle “showstopping” dance.

A public vote will choose the winner, with the judges’ scores as a guide.

The opinions of the four-strong panel will not count towards the final result.

At the beginning of Saturday’s second show, the partnership with the lowest number of votes will be eliminated and the remaining trio will go on to perform their favourite dance from the entire season.

The show’s famous trophy will be lifted by the winning pair shortly before 2200 GMT when the series concludes on BBC One. 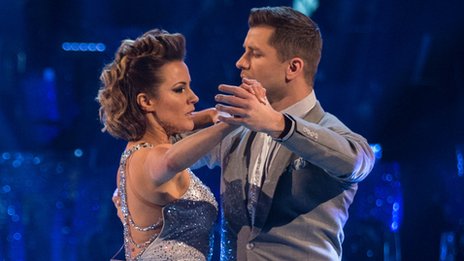 The celebrity: Caroline Flack is a TV presenter who has had hosting roles on shows including I’m a Celebrity… Get Me Out of Here and The X Factor. She was also romantically linked with One Direction singer Harry Styles.

Strictly high point: Scoring the first perfect score – 40/40 – in the semi-final for their frenetic salsa.

She says: “It’s changed my life completely. I feel confident, I realise there are different things that …read more

Ghostbusters beaten by The Secret Life of Pets...

Joni Mitchell 'not in coma'