Strictly Come Dancing has beaten X Factor in their weekend ratings battle, drawing thousands more viewers on both Friday and Saturday than its rival.

BBC One’s Strictly had a Friday average of 6.5m viewers as it went head-to-head with the ITV show, which drew 5.8m.

On Saturday, the shows again had an overlap, though only of half an hour, but Strictly had an average audience of 8.1m, while X Factor drew 7.7m.

Friday’s X Factor audience was one of the smallest since it launched in 2004.

However, it was still double ITV’s usual figure for that time on a Friday.

And Strictly’s Saturday show was down by more than a million on the 9.2m who tuned in to see the second instalment of the series’ launch last year.

X Factor was screened on a Friday for the first time.

ITV said it had broadcast a Friday edition of the show because its Sunday schedule was “too full” to show the full “boot camp” stage.

The programme is now being screened over three consecutive nights.

The channel said when viewers from its +1 catch-up channel were taken into account, its peak was 6.6 million on Friday. Its Saturday audience of 7.7m includes those watching on catch-up. 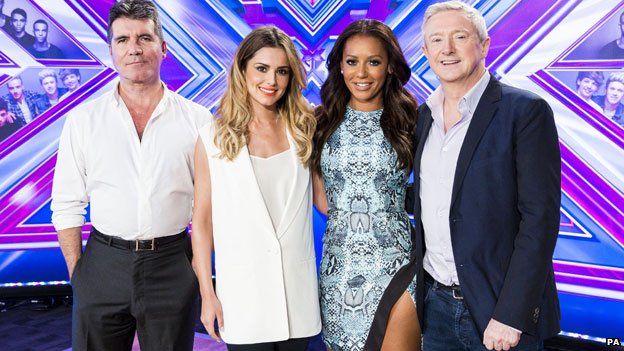 Simon Cowell and Cheryl Fernandez-Versini’s return to the X Factor judging panel, along with the addition of Mel B, were anticipated to boost the show’s fortunes

The BBC has not said how many people watched Strictly on the iPlayer.