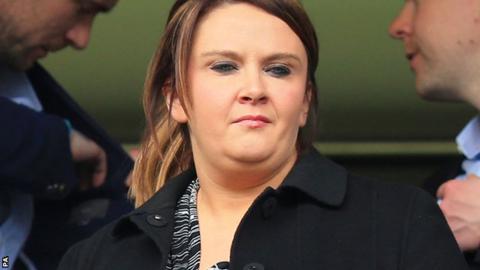 Johnson, 28, faces a jail sentence after being found guilty of sexual activity with a 15-year-old girl.

Sunderland have been criticised for allowing the England international to continue playing after his arrest.

Byrne said she recognised the decision to allow Johnson to continue to play for the club “was a serious mistake”.

In a statement Sunderland said Johnson’s victim had been “very badly let down first and foremost by Mr Johnson and his despicable actions, but also by the club they support”.

The club added: “We are so very sorry for this.”

The Premier League club initially suspended Johnson in March 2015 but lifted that ban after just 16 days.

They eventually sacked him on the eve of his trial last month, when he admitted grooming the girl and one charge of sexual activity.

In those intervening 10 months, he played 28 times for the Black Cats.

Byrne, who joined Sunderland in 2007 and was appointed chief executive in 2011, said in a statement: “Contrary to what has been suggested, I did not understand that Mr Johnson intended to change his plea at trial or at all.

“I was astounded when he did plead guilty.

“I accept that Mr Johnson should not have been permitted to play again, irrespective of what he was going to plead.

“It was a serious error of judgement and I accept full responsibility for this.”