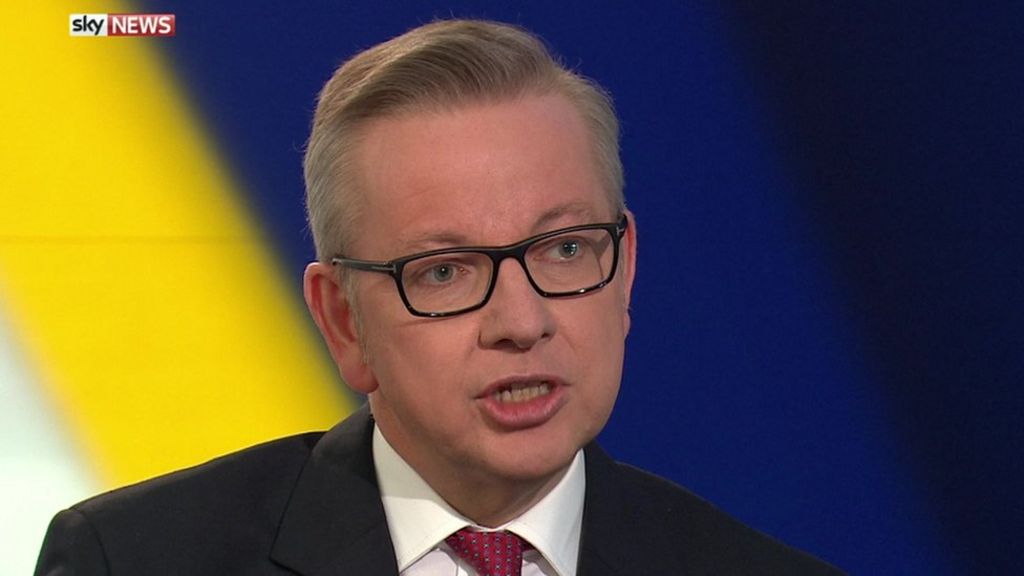 Leaving the EU would lead to more jobs, a “non-racist” immigration policy and allow the government to help the steel industry, Michael Gove has said.

In a live Q&A, the pro-Leave justice secretary urged voters to “trust themselves” and “take back control”.

He was pressed on his campaign’s controversial claim that £350m a week is spent on the EU.

The Remain side said he had “failed to set out a credible plan for Britain outside the EU”.

The Sky News interview followed Thursday night’s show which had a similar format but featured Prime Minister David Cameron, who is campaigning for Remain.

Mr Gove criticised the prime minister’s performance, describing it as “depressing” and “an exercise in trying to scare you”.

Challenged on the lack of international leaders and organisations backing his side, he said the public had “had enough of experts” saying “they know what is best and getting it consistently wrong”.

He repeatedly targeted the “elites” of the EU and criticised their “invincible arrogance”.

Questioned on the £350m figure, which has been criticised by the chairman of the UK Statistics Authority, Mr Gove said he was “happy” to have the claim independently audited and described it as “the difference between the total amount we hand over and what we get back”.

The important thing, he said, was “we don’t have control of that money”.

The justice secretary described the EU as a “job-destroying machine” but also said: “I can’t guarantee every person currently in work in their current job will keep their job.”

Vote Leave have been campaigning hard on immigration in recent days, and Mr Gove said that by leaving, the UK could have an “inclusive, non-racist immigration policy that works in the interest of everyone in this country”.

He faced several hostile questions from the audience, with one man comparing him to a World War One general sending his soldiers “over the top” with “no idea what’s on the front line”.

Responding to a Port Talbot steel worker who asked how he should vote to protect his job, Mr Gove said leaving the EU would allow the government “additional flexibility” to step in and support struggling industries.

Afterwards, the Stronger In campaign highlighted Mr Gove’s comment about people keeping their jobs, and said Leave could not “name a single expert, economic institutions, business or foreign ally who supports them quitting Europe”.

Stonehenge solstice: Number of revellers falls by half