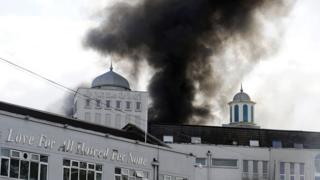 The main part of the mosque was unaffected by the fire

Two teenage boys have been arrested in connection with a fire at a mosque complex in south London.

The youths, aged 16 and 14, were arrested earlier on Sunday on suspicion of arson at the Baitul Futuh Mosque in Morden.

The blaze at the mosque, said to be the largest in western Europe, was tackled by 70 firefighters.

An administration building was badly damaged but not the mosque, London Fire Brigade said.

Abandoned bag of cash in Lower Sundon was...