The Who unveil first song since 2006

Rock legends The Who have unveiled their first song in eight years as they mark their 50th anniversary.

Be Lucky includes lyrical references to Australian rockers AC/DC and French electro band Daft Punk and will be included in a double album featuring the group’s greatest hits.

The band will donate royalties from the new track to teenage cancer sufferers.

One of the most influential rock bands of the 20th Century, their hits include My Generation and I Can See for Miles.

Earlier this year, surviving members Roger Daltrey and Pete Townshend announced they would play a tour, which starts in the UK in November, to mark their 50 years in the industry.

Daltrey described the tour as “the beginning of the long goodbye”. 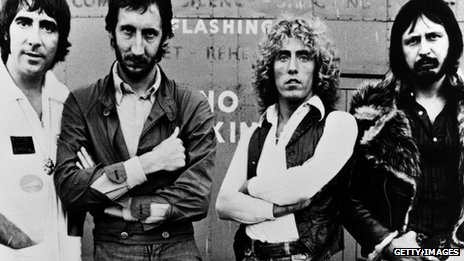 Daft Punk’s single Get Lucky was one of the biggest hits of 2013.

Recorded at British Grove and Yellow Fish Studios, the Who track features long-time collaborators Zak Starkey on drums and Pino Palladino on bass.

In a statement on their website, The Who said: “In keeping with their ongoing support for Teenage Cancer charities, the band have donated their royalties from the song to Teen Cancer America.”

Daltrey was instrumental in founding the Teenage Cancer Trust gigs at the Royal Albert Hall in London in 2000.