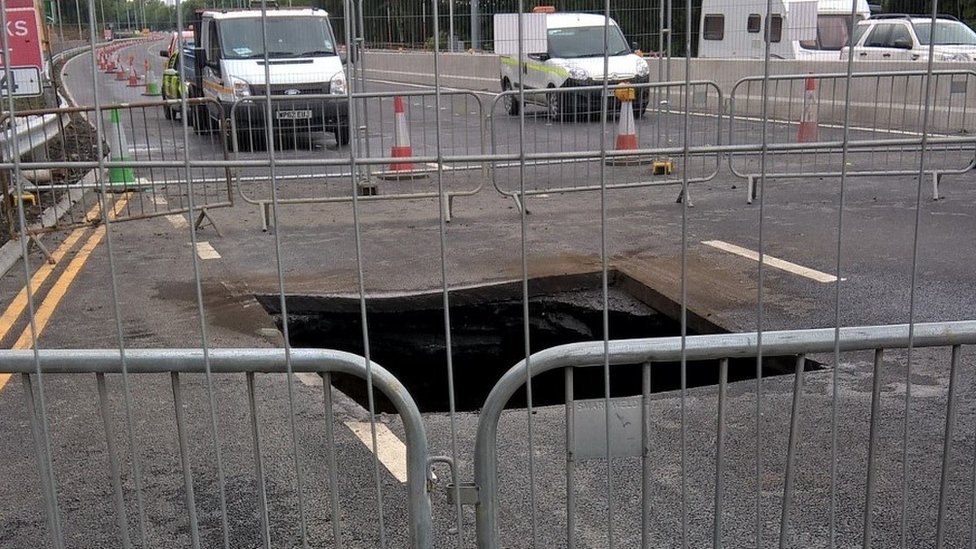 Tens of thousands of motorists in the north-east of England face days of delays after a sinkhole opened up on the A1.

The 5m (16ft) wide, 3m (10ft) deep crater appeared on Saturday night under the northbound carriageway near the Gateshead MetroCentre.

The road, which carries about 90,000 vehicles a day, will be closed between junctions 67 and 68 until Wednesday.

The hole is thought to be related to former mine workings.

Although extra measures are being put in place to minimise disruption, including a contraflow on the southbound carriageway, lifting toll barriers for the Tyne Tunnel, and the suspension of roadworks on other key routes, road users travelling north or southbound are advised to allow extra time for travelling.

The hole is being filled with a specialist concrete mixture before the road is resurfaced.

It was discovered when a slight dip in the road surface became apparent.

Rob Beckitt, duty operations manager at Highways England, asked people to avoid the A1 if possible

He said: “Safety is our top priority. We have to ensure the carriageway is totally safe before drivers use it.

“We and our contractors have been working hard with partners since the hole was discovered and will continue to do so to make the carriageway safe as quickly as possible.”

A Northumbria Police spokesman added: “The A1 is a vital artery and we appreciate all the work Highways England is doing to keep traffic flowing as best as possible.

“We also have extra officers on duty, working hard to help manage the congestion and keep disruption to a minimum.”

The latest travel news can be found here.

Fracking bids to be fast-tracked