Home News Too 'overweight' to take stairs to court
News

Too 'overweight' to take stairs to court 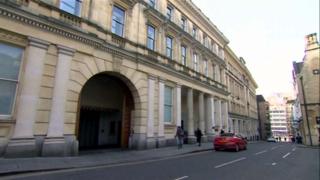 A pre-trial hearing in the case of a Bristol man accused of historical sex offences was postponed because he was unable to walk up the stairs.

A lift from the cells was broken and security staff would not bring Douglas Slade, 74, up using the public lift.

The hearing was told Mr Slade was too overweight to walk up the stairs to the fourth-floor courtroom.

Mr Slade, charged with eight offences against children, was remanded in custody until a hearing in February.

The offences which were allegedly carried out in the 1970s and 1980s, mainly in the Bristol area.

At a previous hearing, his solicitor indicated he would be pleading not guilty.

When Judge Mark Horton asked why the defendant could not be brought up to the courtroom using another lift, he was told it was against the rules.

A spokesman for GEOAmey, which provides security at the court, said it had an agreement with the Ministry of Justice that prevents defendants being escorted through a public area.

Fallon: MPs not ignored over Syria