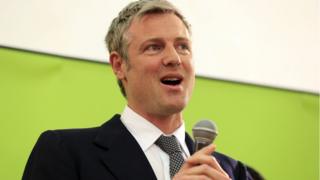 The Conservative Party has chosen Zac Goldsmith to contest the 2016 London mayoral election.

Mr Goldsmith, who was the favourite for the nomination, had balloted his constituents to seek permission to stand.

He is up against Sadiq Khan for Labour.

Conservative mayor Boris Johnson will step down next year after two terms in office.

He announced he would continue as the mayor of London for one year after he was elected as the MP for Uxbridge and South Ruislip in May.

Caroline Pidgeon is the Lib Dem candidate, Sian Berry will contest the election for the Greens and UKIP has chosen its culture spokesman Peter Whittle.

Outside review of Met's Brittan conduct