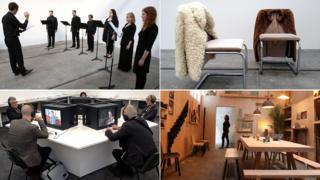 Turner Prize winner to be announced in Glasgow

The winner of this year’s Turner Prize is to be announced in Glasgow later – the first time the contemporary art award has been staged in Scotland.

Four of the last six winners either come from or studied in Glasgow. None of this year’s shortlisted artists, however, have such links with the city.

BBC One wins channel of the year