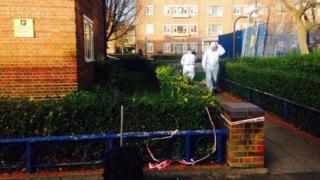 Forensics science experts were investigating the scene earlier this week

Two men have charged with the murder of a teenager stabbed in north London.

His mother, Annette Gill from Tottenham, described him as a “good boy” and said he had been studying mechanics at college.

Adrian Carpenter, 30, and Jermaine Reid, 27, both of Victoria Road, Crouch Hill are due to appear at Wimbledon Magistrates’ Court later.

In an emotional tribute earlier this week, Gary’s aunt, Melissa, said: “He’ll be missed by all of us. GJ was such a lovely kid. He didn’t give us any trouble.”

He is the 15th teenager to be fatally stabbed in London this year. …read more

Terminally ill boy 'had to lie on Heathrow...

Labour Trident deal 'may be impossible'