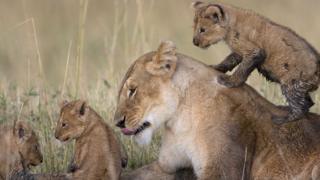 From the section Africa

Two Maasai herdsmen have been charged after allegedly poisoning a famous pride of lions in Narok, south-west Kenya, a wildlife official said.

Eight lions are being treated for poisoning. Two others were killed but at least one was not from the pride.

The lions are thought to have killed three of the herdsmen’s cows when they entered the reserve.

The Kenyan Wildlife Service (KWS) warned that other animals might have been affected.

The lions, from the famous Marsh pride, were featured on BBC wildlife programme Big Cat Diary.