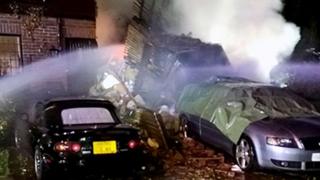 Cars outside the property were damaged

Two people have been injured in a suspected gas blast, which destroyed part of a house in Buckinghamshire.

Five adjoining properties were evacuated after the explosion in the village of Wooburn Green, near Beaconsfield, emergency services said.

Four fire crews attended the incident, which happened at about 17:30 GMT.

Buckinghamshire Fire and Rescue Service said a man was rescued from the terraced property and a female casualty released before they arrived.

The extent of the couple’s injuries are unknown.

Man dies after police use Taser in Shropshire

Thatcher 'was told to impose herself'