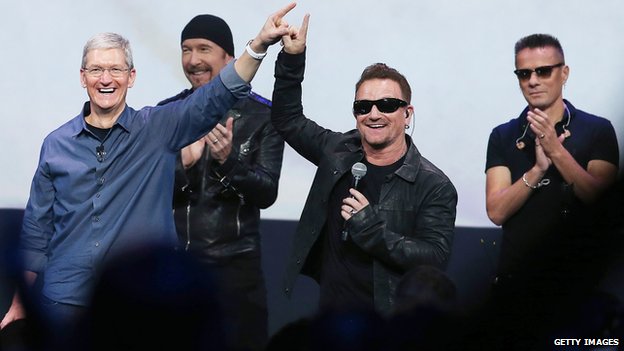 The first album in five years by veteran Irish rock band U2 has been offered for free to the 500 million users of Apple’s iTunes service.

The surprise announcement was made at a California event where Apple CEO Tim Cook unveiled the firm’s latest iPhone and a new smartwatch.

The band also performed live at the event.

U2 lead singer Bono described the release of the 11-track album, Songs of Innocence, as “kind of mindblowing”.

“The most personal album we’ve written could be shared with half a billion people – by hitting send,” Bono said. “If only songwriting was that easy.”

U2 are famed for producing some of the landmark albums of the 1980s and early 1990s, including The Joshua Tree and Achtung Baby.

There had been some speculation this year that the band were planning a new album. However, the free release at the Apple event had not been anticipated.

Several prominent artists – including Beyonce – have released surprise albums recently, although the practice remains a novelty.

Free album releases by large bands are a rarity.

Radiohead initially released In Rainbows in 2007 as a pay-what-you-want download.

U2 have collaborated with Apple in the past. The terms of the deal for the iTunes release are not known.

Shia LaBeouf arrested in anti-Trump protest He Will...