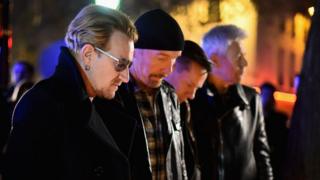 Rock band U2 have written a song in tribute to Paris after the recent attacks that left 130 people dead.

The group were due to play in the French capital in the days after the attacks, but the gigs were cancelled.

They are due to play the first rescheduled show on Sunday.

Before the gig, singer Bono revealed that the new song, titled Streets of Surrender, contains lines about Paris being the “city of liberty” and having “streets …read more