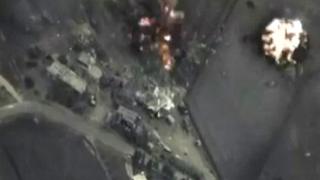 Russia has carried out indiscriminate bombing in Syria that has led to the deaths of civilians, Defence Secretary Michael Fallon has said.

Russia’s involvement would not prevent the UK from making a case for RAF strikes against IS in Syria, he added.

The US has said Russia’s strikes are “only strengthening” the IS position.