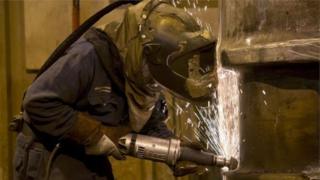 UK manufacturing is encountering a poor end to the year amid “gathering gloom” from the global economy, according to industry body the EEF.

Its survey also points to serious concerns about the future outlooks for the global and UK economy.

As well as exports, the EEF says job prospects have also been hit, particularly with more spare capacity in the oil industry, which has been hit by falling prices.

Manufacturing accounts for about 10% of the output of the UK economy.