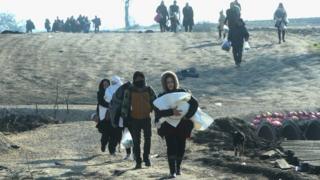 In a letter to the PM, the group of 27 charities – including Oxfam and Amnesty International – say the UK should take a “proportionate” share of refugees.

They praise the commitment to resettle 20,000 Syrian refugees over five years but say more needs to be done.

A government spokesman said the UK has a “long and proud history of offering sanctuary” to those in genuine need.

The letter, coordinated by the British Refugee Council, asks Mr Cameron to show a “new resolve” to deal with the crisis, which saw nearly 4,000 people drown last year and hundreds of thousands more face danger and hardship while fleeing violence.