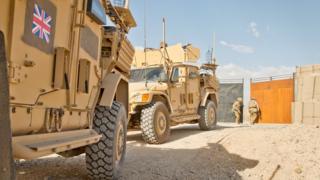 British military personnel have been deployed to Afghanistan’s Helmand province as reports suggest the Taliban is close to overrunning Sangin town.

The Ministry of Defence said a small number of personnel had been sent to Camp Shorabak in Helmand in an “advisory role”.

They will not be in combat and are part of a larger Nato team, the MoD said.

Wirral teen celebrates nine A* grades and has...

Train stopped by police when bagels flung in...