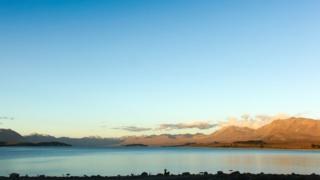 One of two tourists who have died while kayaking on a lake in New Zealand’s South Island was British, the Foreign Office (FCO) has confirmed.

The pair were killed after being hit by strong winds that tipped them into the cold water.

Nine others were rescued in the incident at Lake Tekapo, a popular tourist destination.

The identities of the victims have not been released but local media reported they were both men in their 20s.

Car crashes into two horses and riders in...