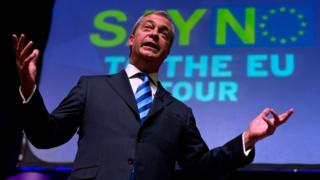 UKIP is to dedicate its conference to its campaign for Britain to leave the EU ahead of the in/out referendum, leader Nigel Farage has said.

Party members and activists are gathering in Doncaster, with Mr Farage to deliver a speech at noon.

He told the BBC the conference would not be about UKIP – as it is “not my priority” – but winning the referendum.

He added there would be a “surprise” coming together of all anti-EU groups in the country in a “show of unity”.

UKIP, which is committed to Britain withdrawing from the European Union, had launched its own No campaign for the referendum, which the government has pledged to hold by 2018.

Now it is officially joining forces with millionaire party donor Arron Banks, who is behind The Know campaign – their relaunched campaign will be called “Leave.eu”

Dreamland set to open to revellers