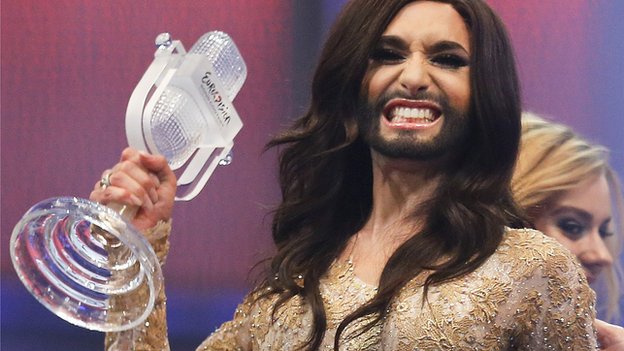 Austria’s Conchita Wurst won the contest in Denmark this year, but the contest was overshadowed by political events

Ukraine has announced it will not be taking part in next year’s Eurovision Song Contest due to limited finances.

Mr Alasania said the broadcaster had to “optimise” its funds given the unstable financial and political situation caused by the conflict in east Ukraine.

Ukraine came sixth at the event this year in Copenhagen.

A statement said it had made a deal with the European Broadcasting Union (EBU) to exit the competition for the coming year, with a view to returning in 2016.

The 2015 contest is being held in May in Vienna, following the triumph of Austria’s Conchita Wurst at the event earlier this year.

The Denmark contest was overshadowed by the ongoing crisis in Ukraine, with Russia’s entry – The Tolmachevy Sisters – being booed by sections of the audience during the results.

Russia ended the night in seventh place with 89 points, behind Ukraine’s entry – singer Mariya Yaremchuk – with 113.

Ukrainian singer Ruslana won the event in 2004 and has subsequently become one of the leading voices of protest in opposition to Russia’s influence in her country.

BBC's Robinson to have tumour removed