This work, called simply Campbell’s Soup, was created in 1968

A unique Andy Warhol exhibition featuring more than 100 examples of his work has opened in Liverpool.

Called Transmitting Andy Warhol, the Tate Liverpool exhibition focuses on how the American artist publicised his iconic paintings around the world.

It is the first major solo display of Warhol’s work ever to be shown in the north of England.

Warhol was a leading proponent of the “pop art” genre, a post-war style based on vivid imagery from popular culture. 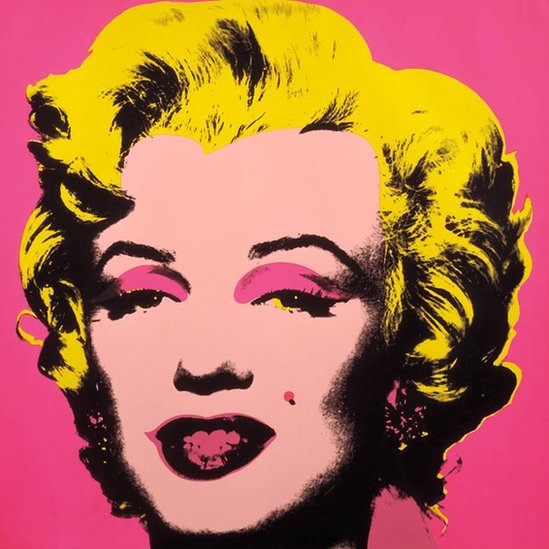 Some of Warhol’s most famous works feature Marilyn Monroe

Warhol, who died in 1987, was famous for producing works featuring Marilyn Monroe and Elvis Presley, as well as pieces highlighting everyday items like soup cans.

His works are among the most sought-after in the world and, in 2011, a self-portrait sold for £10.8m in London.

Tate Liverpool said the new exhibition explores how Warhol “transmitted” his work into the public realm via his interaction with popular culture.

The exhibition is also intended to “challenge the traditional separation between high and low culture”.

Stephanie Straine, the exhibition’s assistant curator, said: “Andy Warhol believed that art was for everyone, and tried to get his work out there to the biggest audience possible.

“This led him to have his own show on Manhattan cable TV, and even to create designs for musicians and albums, such as Velvet Underground and John Lennon’s Menlove Avenue.

“I’m thrilled that we have this exhibition here in Liverpool and I’m sure our visitors will enjoy it.”