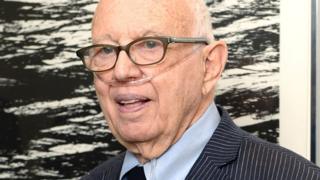 Influential abstract artist Ellsworth Kelly has died at the age of 92.

According to dealer and gallery owner Matthew Marks, he died of natural causes at home in New York.

Known for vibrant works with geometric shapes and bright colours, the artist had retrospectives at New York’s Guggenheim and the San Francisco Museum of Modern Art over his career.

In 2013, he was presented with the National Medal of Arts by US President Barack Obama.

Yelawolf – Devil In My Veins