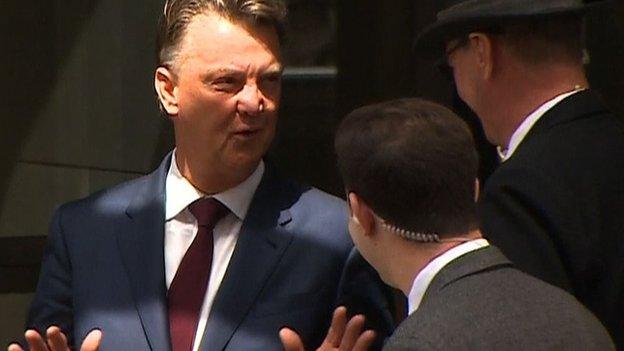 Louis van Gaal left Manchester United’s London hotel on Sunday without being told by the club that Jose Mourinho is set to succeed him as manager.

The 64-year-old has now travelled back to Manchester along with his squad.

However, it is understood neither the Dutchman nor his coaching staff have been told what is happening by United’s executive vice-chairman Ed Woodward.

Van Gaal said “it’s over” when a reporter approached him as he left the hotel on Sunday – but he is said to have been referring to his side’s season rather than his own job.

Other members of Van Gaal’s Old Trafford staff are due to go on holiday.

Man Utd to name Mourinho as managerWhere has it gone wrong for Van Gaal?Mourinho the best man for United – Phil NevilleFA Cup win does not mask Man Utd problems – Shearer

Woodward as well as Joel and Avie Glazer, part of the American family who own the Premier League club, were at Wembley on Saturday – but are not thought to have been at the team hotel.

Bus and car in one-hour stand-off

Brit dies a month after US street attack