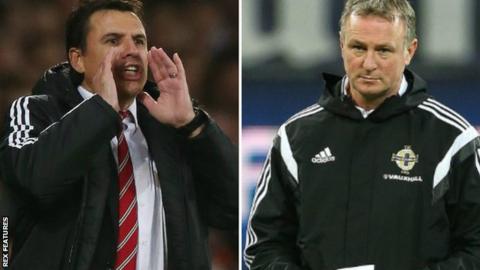 Wales will be without several first-team players for their Euro 2016 warm-up match against Northern Ireland – but manager Chris Coleman still expects a full-blooded derby.

Northern Ireland are without defender Chris Baird and midfielder Chris Brunt, who will miss Euro 2016.

But Coleman says: “It will be a bit feisty and that’s what we want.”

He added: “When we play each other we don’t want to lose to a neighbouring country.

“I know Northern Ireland Michael O’Neill and I know the mentality of his team. They won’t be wanting to come here thinking it is just a little warm-up game before the tournament.”

However, O’Neill reckons that with this summer’s tournament so close the players will not take any unnecessary risks.

“At this stage of the season, both sets of players will have an eye on the summer so, while we’ll want the game to be competitive, I think an element of common sense will prevail,” said O’Neill.

Wales’ talismanic forward Bale was left out of the squad in a joint decision between the Football Association of Wales and his club Real Madrid.

Ramsey, James Collins, Andy King and David Edwards are out through injury and illness, while Neil Taylor is rated as doubtful having missed Swansea City’s 1-0 win over Aston Villa because of a dead leg.

Their absences could create opportunities for the likes of Leicester forward Tom Lawrence, currently on loan at Cardiff City, and Liverpool goalkeeper Danny Ward, who is expected …read more

'Sport must learn from Johnson case'

'Tampon tax' cut to be taken to EU