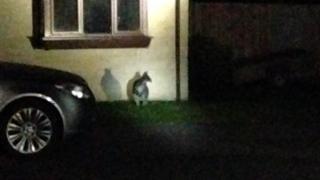 From the section Gloucestershire

Officers tweeted they had cornered a “kangaroo” but it later escaped

Police pursuit of an escaped wallaby a sparked comic reaction after officers said they had cornered a kangaroo.

The Australian marsupial, which was spotted in Dursley, Gloucestershire, then escaped, police confirmed.

Officers themselves then said it was “not the usual bouncer” they deal with.

Gloucestershire Police had tweeted: “Kangaroo update – we have it cornered ‘outback’ of a house …read more

Scrapping IS play 'shuts down' debate