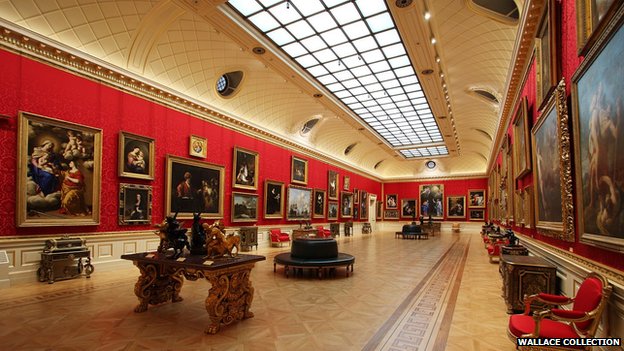 The Wallace Collection’s Great Gallery, which contains paintings by masters including Rubens, Velazquez and Titian, has reopened after a £5m refurbishment.

Regarded as one of the finest picture galleries in the UK, the exhibition space had been closed for two years.

The central London gallery boasts some of the most famous 17th Century European paintings in the country.

The renovation was paid for by the Monument Trust, a charity set up by the Sainsbury family.

On its new crimson silk-covered walls hang paintings including Frans Hals’ The Laughing Cavalier, Velazquez’s Lady with a Fan, Poussin’s A Dance to the Music of Time, Rubens’ The Rainbow Landscape and Titian’s Perseus and Andromeda.

Writing in the Daily Telegraph, art critic Richard Dorment recently described the renovated room as “the single most splendid gallery in London”, explaining that “the gallery now looks twice as big, twice as grand, and twice as glamorous as it did before”.

The restoration involved raising the ceiling to allow in natural light as originally intended.

The daylight will be carefully controlled by a high-tech lighting system to ensure a safe environment for the artworks.

Meanwhile, the parquet flooring and wall covering have been replaced and the gilded coving and other decorative features have been “refreshed”.

The Great Gallery was built at the back of Hertford House, a grand London townhouse, in the 1870s to accommodate the collection.

The gallery was built by Sir Richard Wallace, illegitimate son of the Fourth Marquess of Hertford, who inherited the collection after his father’s death.

This entry passed through the Full-Text RSS service – if this is your content and you’re reading it on someone else’s site, please read the FAQ at fivefilters.org/content-only/faq.php#publishers.
Scottish readers: Undecided about the referendum? Please read …read more