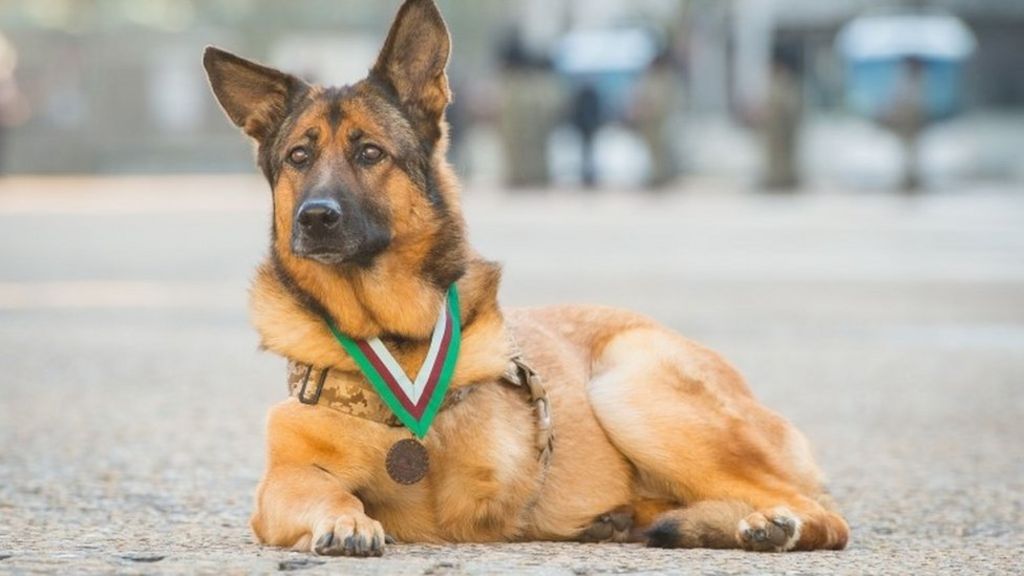 A military dog who lost her leg on duty in Afghanistan has received a vet charity’s medal honouring the work of animals in war.

Lucca, a 12-year-old German Shepherd, suffered injuries including the loss of a leg during a search for improvised explosive devices (IEDs) in 2012.

She received the medal at a ceremony at Wellington Barracks in central London.

The Dickin medal, founded in 1943, is awarded by the People’s Dispensary for Sick Animals (PDSA) charity.

Lucca was trained by US Marine Corps as a search dog to sniff out munitions and explosives, and according to the Marines, protected the lives of thousands of allied troops.

On her final patrol Lucca discovered a 30lb (13.6kg) IED and, as she searched for additional explosives, a second device detonated.

She instantly lost her front left leg and suffered severe burns to her chest.

Her previous handler Corporal Juan Rodriguez recalled the moment she was injured: “The explosion was huge and I immediately feared the worst for Lucca.

“I stayed with her constantly throughout her operation and her recovery. She had saved my life on so many occasions – I had to make sure that I was there for her when she needed me.”

Lucca, who is now retired, completed over 400 missions in Iraq and Afghanistan during six years of active service.

She lives in California with her handler, Gunnery Sergeant Chris Willingham, but has been flown to London for the medal ceremony.

Lucca’s Dickin Medal will be presented by the PDSA director general, Jan McLoughlin, who praised her “conspicuous gallantry and devotion to duty”.

Her award will bring the total number of PDSA Dickin Medals awarded to animals in military conflict to 67. Since its introduction it has been awarded to 31 dogs, including Lucca, 32 World War Two messenger pigeons, three horses and …read more

Nicola Sturgeon: 'No rational reason' for Theresa May...