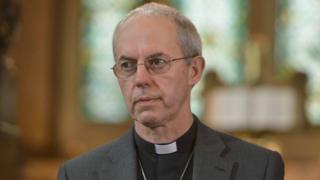 Archbishop gives warning over IS threat to Christianity

Christianity faces “elimination” in the Middle East, the region where it began, the Archbishop of Canterbury will warn in his Christmas Day sermon.

The Most Reverend Justin Welby will say so-called Islamic State is “igniting a trail of fear, violence, hatred and determined oppression”.

He will also brand IS as “a Herod of today” – a reference to the Biblical king at the time of Jesus’s birth.

The archbishop will deliver his sermon at Canterbury Cathedral.

He will say: “Confident that these are the last days, using force and indescribable cruelty, they [IS] seem to welcome all opposition, certain that the warfare unleashed confirms that these are indeed the end times.

“They hate difference, whether it is Muslims who think differently, Yazidis or Christians, and because of them the Christians face elimination in the very region in which Christian faith began.

“This apocalypse is defined by themselves and heralded only by the angel of death.”

He will also say that to those who have been, or are being, “dehumanised by the tyranny and cruelty” of Islamic State, then “God’s judgment comes as good news, because it promises justice”.

Rolex found after being lost in river