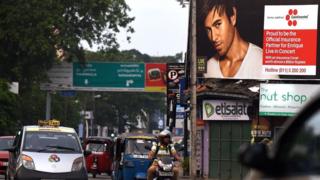 Organisers of Iglesias Sri Lanka gig ‘should be whipped’

From the section Asia

Sri Lanka’s president says the organisers of an Enrique Iglesias gig should be whipped as punishment over the behaviour of some female fans.

Maithripala Sirisena said scenes of local women running on stage to kiss the singer and throwing their underwear at him, was “most uncivilised”.

He said the organisers should be “whipped with toxic stingray tails” – referring to an ancient punishment.

The concert was held in the capital Colombo on 20 December.

Mr Sirisena said he had been …read more