Comedian Jack Whitehall has been named “king of comedy” at the British Comedy Awards for the third year running.

The Bad Education star did not collect the award in person, sending his father Michael in his place.

Jonathan Ross hosted the ceremony, to be shown on Channel 4 on Wednesday.

Harry Enfield was named best TV comedy actor for Harry and Paul’s Story of The Twos, the spoof documentary celebrating 50 years of BBC Two, which he made with Paul Whitehouse.

The same programme was named best sketch show at this year’s event, held at the Fountain television studios in Wembley, north west London.

Ross poked fun at the venue’s apparent remoteness in his opening remarks, joking that “even the Ebola virus can’t be bothered to get the Tube here”.

The chat show host also made jokes at the expense of Jeremy Clarkson, Griff Rhys Jones and Rolf Harris, the former TV entertainer who was jailed this year for committing 12 indecent assaults against four girls. 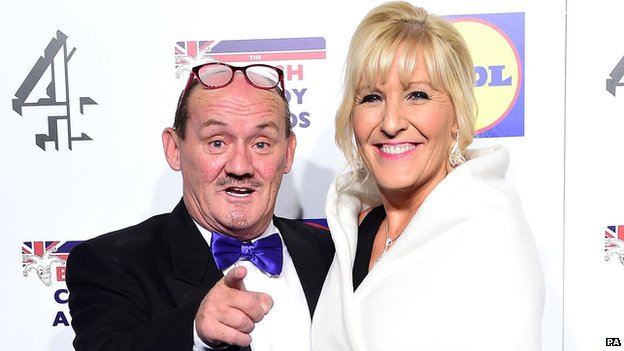 “This year comedy, like Rolf Harris’s lawn, has grown and grown,” he told an audience that included former X Factor judge and Tulisa Contostavlos and I’m a Celebrity… Get Me Out of Here! winner Carl Fogarty.

Whitworth gallery up for Riba prize

How to compose music for horses

UK cash to protect antiquities from IS