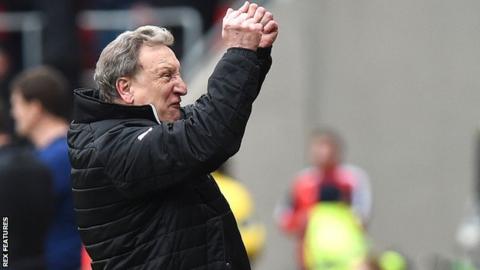 While Burnley were busy going seven points clear at the top of the Championship, miraculous comebacks and sublime goals were taking centre stage in the Football League.

A late finish for Exeter and Carlisle

Only nine minutes had been played between Exeter and Carlisle before the League Two match was halted and one of the stands at St James Park evacuated.

There were reports of smoke being seen at the back of the Stagecoach Stand, which houses home and away supporters as well as changing rooms and press facilities, and fans were asked to make their way onto the field while investigations took place.

It appears a smoke grenade was the cause and an arrest was made in connection with the incident.

The match resumed after a 70-minute delay and ended 2-2, with Hallam Hope’s late equaliser giving the Carlisle fans a happy 347-mile journey home at the end of a very eventful trip to Devon.

On your marks, get set, bake!

Coach Jon Whitney was placed in charge of Walsall’s first team after the Saddlers sacked Sean O’Driscoll on Sunday and, with the help of …read more