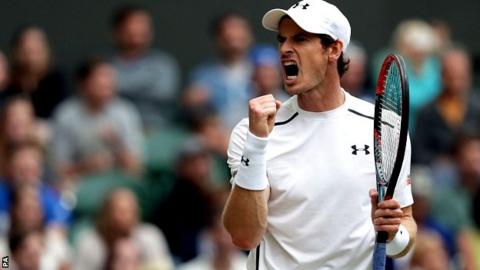 Andy Murray saw off the threat of Australian rising star Nick Kyrgios with a clinical performance to reach his ninth Wimbledon quarter-final.

The Briton, seeded second, won 7-5 6-1 6-4 on Centre Court and will next face French 12th seed Jo-Wilfried Tsonga on Wednesday.

After matching Murray for 40 minutes, Kyrgios’ challenge faded quickly under sustained pressure from the Scot.

Murray, the 2013 champion, is into the last eight without dropping a set.

The 29-year-old has now won eight matches in a row on grass, and he joins Pete Sampras and John McEnroe in reaching nine consecutive Wimbledon quarter-finals.

‘Nick lost his focus a bit’

Murray had beaten Kyrgios at the other three Grand Slams – and he brushed aside any thought that this might be the Australian’s time with a brilliant display.

The world number two was focused throughout, winning 80% of points on the Kyrgios second serve and denying the 21-year-old a single break point.

“The first set was very tight. I managed to get the break at 6-5 but it was tight up to that point,” Murray told BBC Sport.

“The second set was much more comfortable, Nick lost his focus a bit. I was able to dictate a lot of the rallies.”

Asked about the growing expectation of a second title following the defeat of Novak Djokovic on Saturday, Murray added: “Every year I play here it’s the same, it’s not any different this year.

“I try my best to win my matches and go as deep as possible.

“The matches, as you progress, get tougher. Tsonga is next who is a tough grass court player and I’ll have to play very well to win that one.

It is a measure of how sharp Murray is looking that he won the opening set despite Kyrgios making 30 of 34 first serves – the bedrock of his game.

There were flashes of brilliance all over the court from the Australian and a tie-break appeared inevitable after 11 games without a break point, but Murray grabbed the initiative with a brilliant return game.

Identity fraud up by 57% as thieves target social media