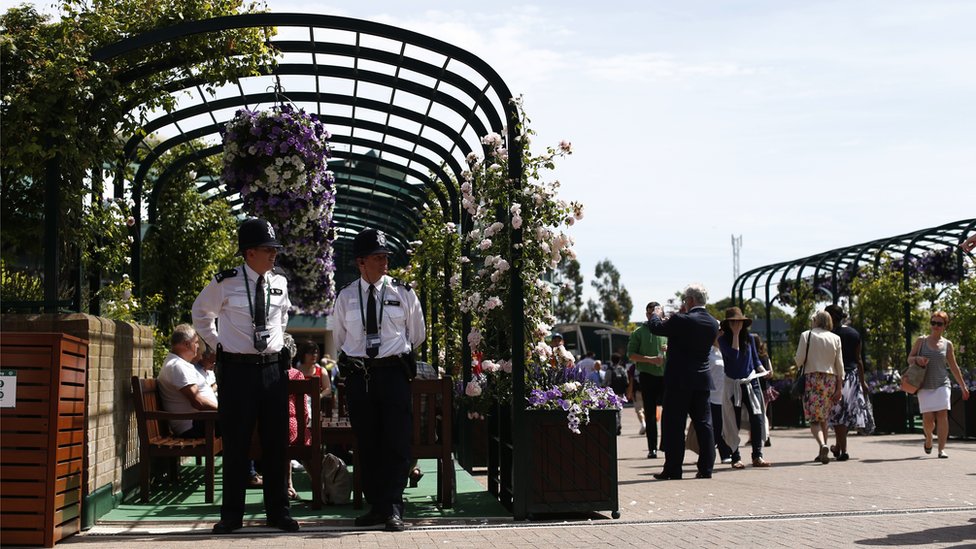 The number of private security staff has been increased at Wimbledon this year in the wake of recent terrorist attacks abroad, organisers have said.

The measure is part of heightened security for the tennis championships, which start next week.

Armed police would again be on patrol but “deployed in a different way”, Scotland Yard said, though it did not give any details.

The Met said security at Wimbledon had been “thoroughly reviewed”.

The review followed events including the explosions at the Stade de France in November 2015 – part of the attacks on Paris that left 130 people dead.

A spokeswoman for Wimbledon organisers, the All England Club, said: “There will be more security in place than before.

“A level of armed police will be in evidence. The level of security and policing is commensurate with the threat and multi-layered, and it has been heightened as you would expect with everything that has been going on.

“We work with the Metropolitan Police all year round and with other authorities to formulate the plans, and people queuing outside Wimbledon are included in the overall plan.”

Called out: What’s banned? Any bag exceeding 40cm x 30cm x 30cm (16in x 12in x 12in)
Hard-sided items of any size
Any item which may be interpreted as a potential weapon including sharp or pointed objects – such as knives or large corkscrews – and “personal protection” sprays
Large flags (over 2ft x 2ft, 60cm X 60cm), banners, rattles, klaxons or oversized hats
Any objects or clothing bearing political statements or commercial identification intended for “ambush marketing”
Selfie sticks

A Met Police spokesman said: “We will not discuss specific security arrangements that will form part of our policing operation.

“However, in light of events around the world, the operation has been thoroughly reviewed. A range of tactics will be put in place, some highly visible and some that the public will not notice and that includes a dedicated deployment of armed officers.

“Armed officers have supported the policing operation in previous years, but this year will see them deployed in a different way.”

The force would not give any more details on this deployment.

Other sporting events, including Euro 2016, Royal Ascot and the Tour de France, have recently reviewed their own security.

There would be “extensive searches of the person, bags and vehicles” on entry to the All England Club grounds, Wimbledon said.

Bags must be soft and no bigger than …read more

Lorry smashes into house by field near Hinstock