The illustration entitled ‘For a long time they looked at the river beneath them’ is set in chapter six of the second Milne book.

One of the most famous images of Winnie the Pooh has sold for £314,500 at auction, three times its estimate.

EH Shepard’s ink drawing of the bear playing Poohsticks with Piglet and Christopher Robin was published in 1928.

The illustration, which featured in AA Milne’s second book, The House At Pooh Corner, had been in a private collection since the 1970s.

It formed part of Sotheby’s sale of children’s books.

The famed drawing, entitled For a long time they looked at the river beneath them… is set in chapter six of the second Milne book, which was called “In which Pooh invents a new game and Eeyore joins in”.

It was one of several Shepard illustrations up for auction.

A pencil drawing of the same scene sold at Sotheby’s last year for £58,750. 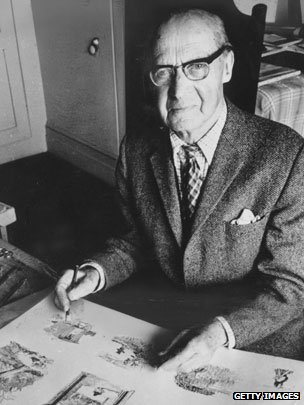 EH Shepard was made an OBE in recognition of his illustrations

The original wooden crossing on which the illustration is based, known as Posingford Bridge, is in AA Milne’s hometown of Ashdown Forest in East Sussex.

The bridge fell into disrepair by the 1970s, but was restored and reopened by Christopher Milne, the author’s son who inspired the character of Christopher Robin, in May 1979.

It was completely rebuilt in 1999.

Debut novel up for Baileys Prize

Great British Bake Off: Who could replace Mel...