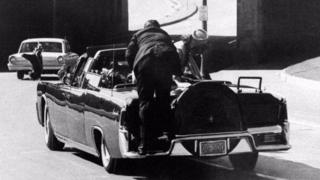 A still image from the assassination. The Nix film also shows Jackie Kennedy climbing on to the boot of the limousine

A woman whose grandfather filmed the assassination of President John F Kennedy as a home movie is suing the US government for its return.

Gayle Nix Jackson is also seeking $10m (£6.6m) in compensation over the film shot by Orville Nix in November 1963.

He sold the film to a news agency that year but it was later handed to the government for its inquiries.

BBC will not close its TV News Channel