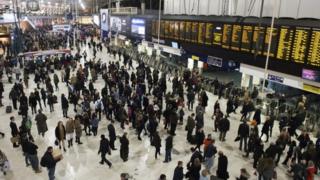 Train delays to major airports expected because of engineering work

Passengers going by train to the UK’s two biggest airports are set to face long delays over the festive period as engineering work begins.

Network Rail said 20,000 of its workers would be carrying out almost 500 improvement projects across the whole of the UK during the festive season.

Its chief executive Mark Carne has thanked passengers for their patience.

He also said that passengers had in the past “shown themselves to be incredibly understanding of planned improvement work”.

Gatwick Express trains will be suspended from 24 December to 4 January, while work is undertaken to replace a major railway junction at Purley, south London.

Southern Railway services to Sussex will also be affected.

Neither Heathrow Express nor Heathrow Connect services will run for four days after Christmas Eve, due to a …read more

Theresa May flies to China for first G20...