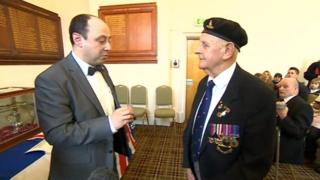 Ernest Turner received the Legion d’Honneur from the French republic

A World War Two veteran given France’s highest bravery award said he would almost rather be back in action than made a fuss over at a ceremony.

Ernest Turner was made a Chevalier de l’Ordre National de la Legion d’Honneur for his part in the D-Day Landings in a presentation in Ilkeston.

He said he was rather embarrassed by the ceremony and, if he was younger, would prefer to fight on the beaches.

A French representative said they owed their freedom to those involved.

Government looks for new spending cuts of up...